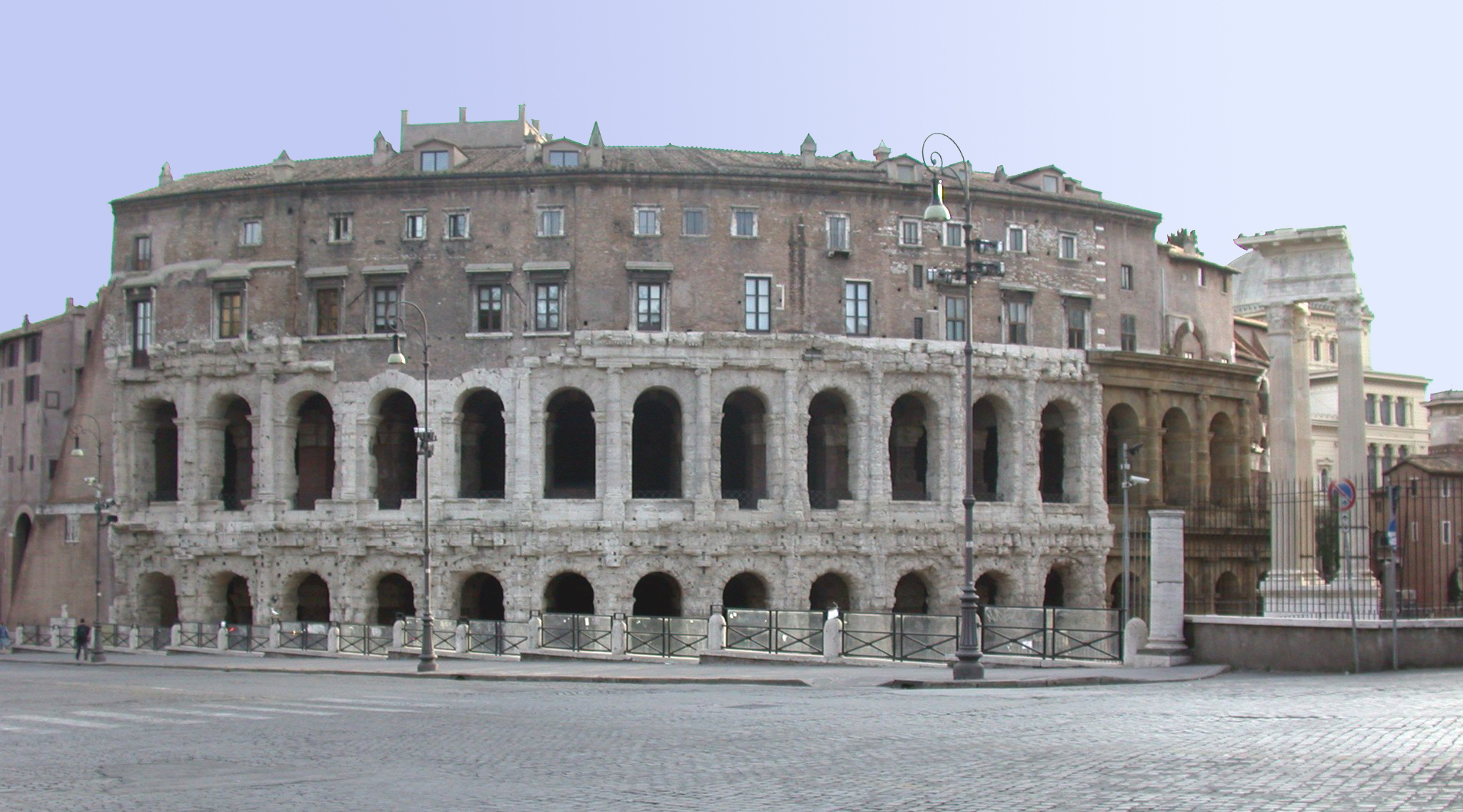 The Theatre of Marcellus (Latin: Theatrum Marcelli, Italian: Teatro di Marcello) is an ancient open-air theatre in Rome, Italy, built in the closing years of the Roman Republic. At the theatre, locals and visitors alike were able to watch performances of drama and song. Today its ancient edifice in the rione of Sant’Angelo, Rome, once again provides one of the city’s many popular spectacles or tourist sites.

It was named after Marcus Marcellus, Emperor Augustus’s nephew, who died five years before its completion. Space for the theatre was cleared by Julius Caesar, who was murdered before it could be begun; the theatre was so far advanced by 17 BC that part of the celebration of the ludi saeculares took place within the theatre; it was completed in 13 BC and formally inaugurated in 12 BC by Augustus. 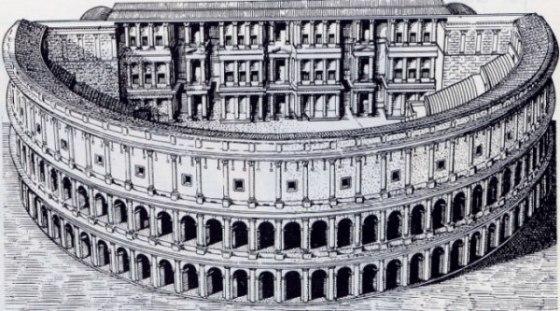 The theatre was 111 m in diameter and was the largest and most important theatre in Ancient Rome; it could originally hold between 11,000 and 20,000 spectators.[1][2] It was an impressive example of what was to become one of the most pervasive urban architectural forms of the Roman world. The theatre was built mainly of tuff, and concrete faced with stones in the pattern known as opus reticulatum, completely sheathed in white travertine. The network of arches, corridors, tunnels and ramps that gave access to the interiors of such Roman theaters were normally ornamented with a screen of engaged columns in Greek orders: Doric at the base, Ionic in the middle. It is believed that Corinthian columns were used for the upper level but this is uncertain as the theater was reconstructed in the Middle Ages, removing the top tier of seating and the columns.

Like other Roman theaters in suitable locations, it had openings through which the natural setting could be seen, in this case the Tiber Island to the southwest. The permanent setting, the scaena, also rose to the top of the cavea as in other Roman theaters. 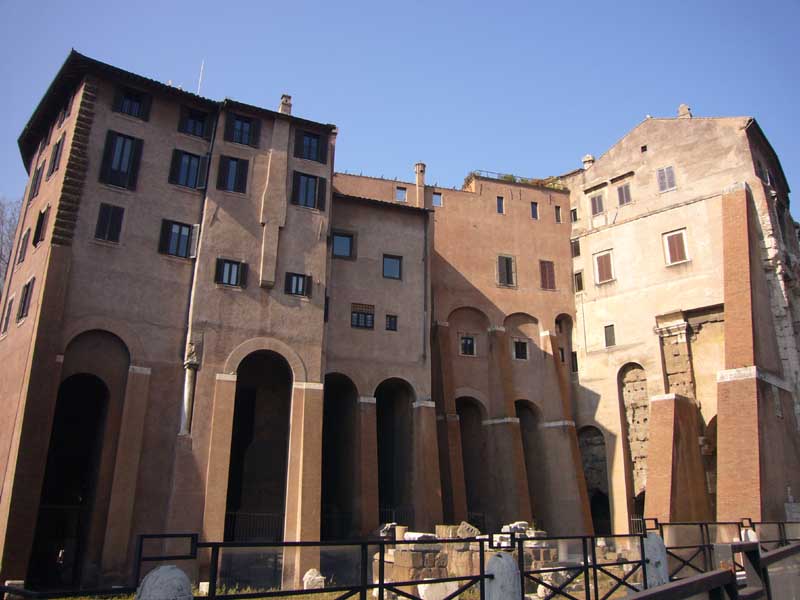 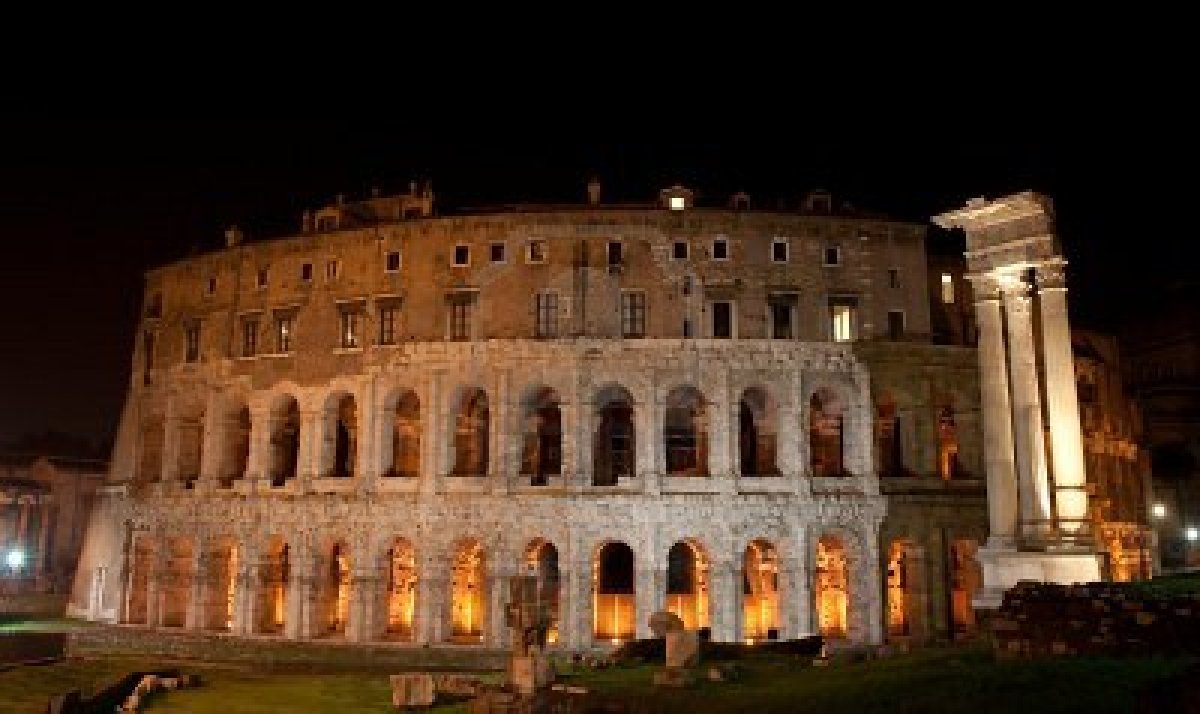 The theatre fell out of use in the early 4th century and the structure served as quarry for e.g. the Pons Cestius in 370 AD. However, the statues located inside the building were restored by Petronius Maximus in 421 and the remaining structure still housed small residential buildings. In the Early Middle Ages the theatre was used as a fortress of the Fabii and then at the end of the 11th century (when it was known as templum Marcelli), by Pier Leoni and later his heirs (the Pierleoni). This saved the complex from further destruction. The Savelli held it in the 13th century. Later, in the 16th century, the residence of the Orsini, designed by Baldassare Peruzzi, was built atop the ruins of the ancient theatre.

Now the upper portion is divided into multiple apartments, and its surroundings are used as a venue for small summer concerts; thePortico d’Ottavia lies to the north west leading to the Roman Ghetto and the Tiber to the south west.

In the 17th century, the renowned English architect Sir Christopher Wren explicitly acknowledged that his design for the Sheldonian Theatre in Oxford was influenced by Serlio’s engraving of the Theatre of Marcellus.